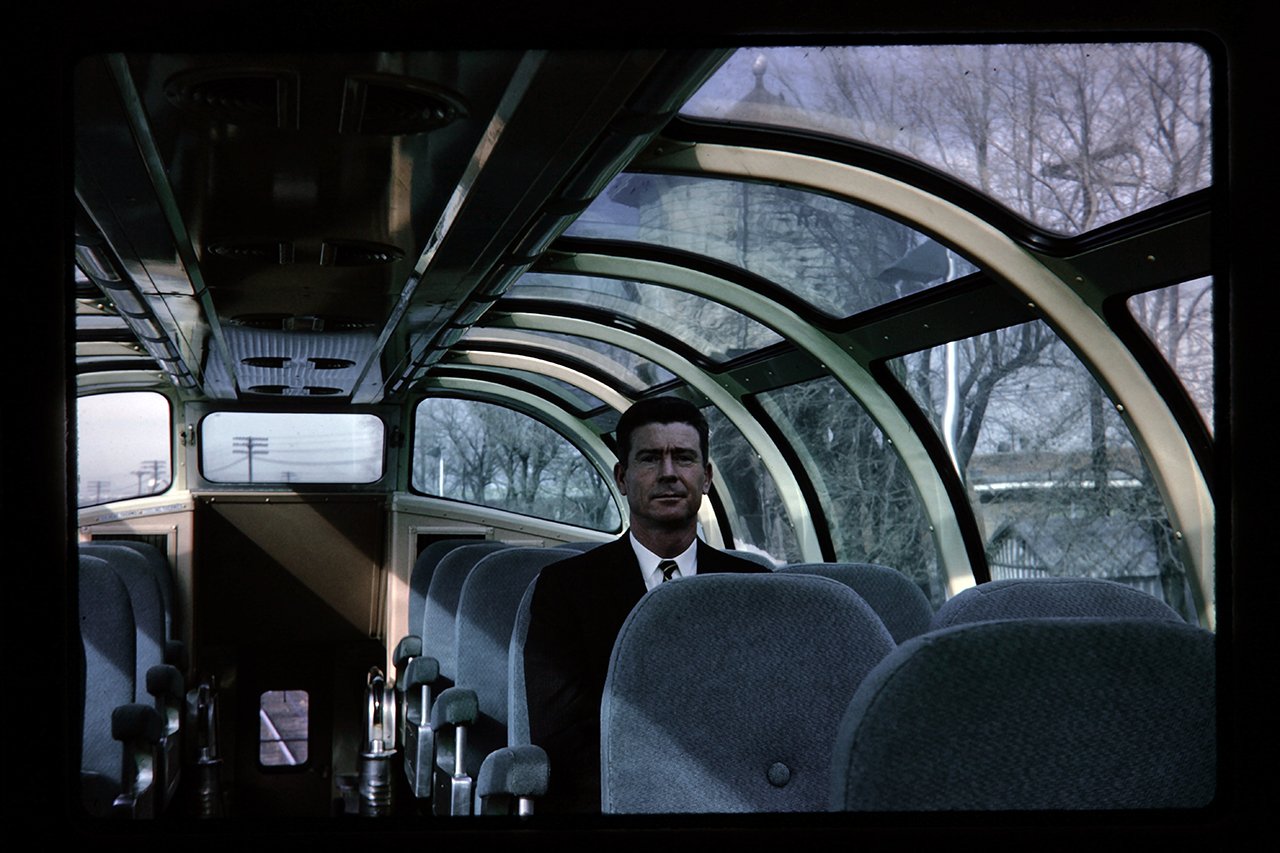 Above: Bill in the Observation car, railroad, America, c.1962

Bill Hinson, my dad, died 30 years ago today. This is my favorite picture of him, and I think it is also my favorite picture by him. I’m nearly sure that the train was stopped and he set up his camera on a tripod, chose the framing, and then posed for his own portrait. He got really lucky with the framing of the telephone poles in the distance and the rail in the bottom window, and I’m sure he knew that too.

This was his world, traveling around the country gathering grassroots data from the farmers who were tending the future of America in their fields. The solitude of this photograph is meaningful too. If he was anything like me, he enjoyed being left alone as much as he enjoyed being out in the fields.

The legacy of his photography lives on, not just in the macro lens of this archive but also in the microcosm that is my family. The other day I came across digital files of three pictures he took, and those files were scanned before I came up with a system for transferring the handwritten notes from Dad’s slide to the digital file itself. Too lazy to look for the original slide in storage, I sent the files as an attachment to my dad’s cousin in Texas. “That’s your mom, right?” I asked her. Nope, not her mom. “I wonder if she was one of the Hinsons?” she suggested.

So I turned to my uncle in North Carolina, and he enlisted the help of his sister. We got as far as identifying the older woman as their Aunt Soonie. “My curiosity is aroused as to how you happen to be in the company with Aunt Soonie,” he wrote.  “To further my guessing game, I know that Aunt Soonie’s son lived in Washington and that he and Bill fished together and got reacquainted.  I am guessing that Aunt Soonie was visiting her son (Clarence) or maybe living with him.”

Then a memory was unleashed like a golden retriever in the backyard of my brain. I wrote to them, “Here’s what I remember, but it’s not about those pictures. I remember that I was in someone’s wedding in the Washington DC area who was somehow related to Bill, my dad. I was only 5 or so when I was in the wedding, so I don’t remember much else except that I was the flower girl, and I carried a basket of flowers. So, drawing on that info and what you just told me, I guess that Aunt Soonie came to visit her son in DC, and we all went over to see her. And I think that the young couple might be the ones who got married at the wedding I was in.”

OK, it’s not a revelation that will make this a bigger news day, but it was a connection…to an ancient memory, to my aging, far away family members, to the people in the pictures and the 1960s. A connection to my dad.

More Portraits in the Archive