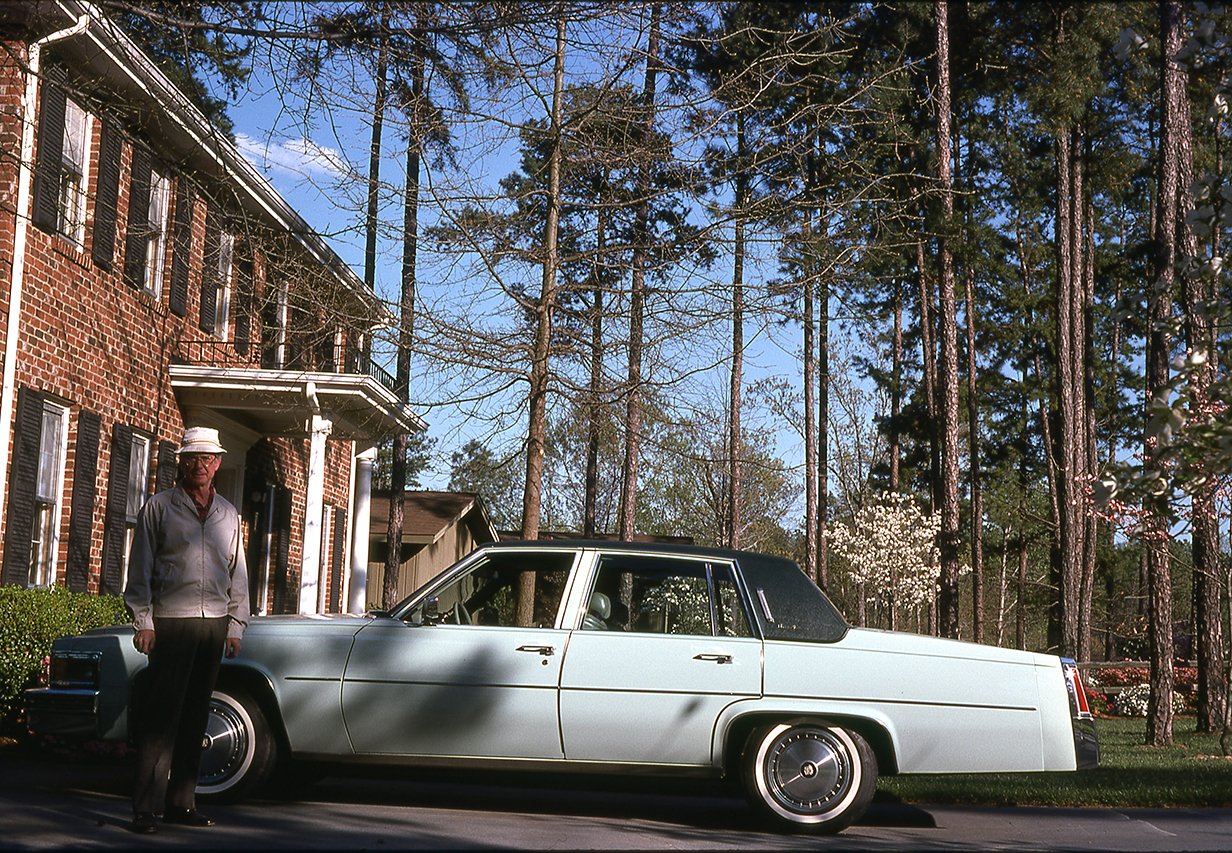 I know my dad was proud of his yard and his green thumb with azaleas. I also think he was pleased with and maybe proud of this purchase: a 1977 Cadillac Sedan de Ville. It seems like not that long ago until I read this bit of trivia on Wikipedia – “For 1977, the lineup included the…four-door Sedan de Ville ($9,864).”

But it is long ago, and far away, too. This sweet passage from the young adult novel Dancing in Cadillac Light by Kimberly Willis Holt suggests a scene in dad’s azalea-filled yard that could have taken place if life had followed a different route.

I hadn’t been to the homeplace since Grandma died. That little house looked so lonely up there with the empty bird feeder and the closed curtains. Grandma had fed the birds sunflower and thistle seeds every morning, and she always kept the curtains tied back in the daytime. My throat felt like it was filled with cotton and a lonesomeness poured over me like a gully-washer rain. It had nothing to do with my tree house. I was remembering how Grandma liked to hum along to a scratched-up Johnny Cash album, how whenever someone visited her, she’d say, “Look what the cat drug in!” How she always smelled sweet because every morning she dabbed Cotillion cologne behind her ears.
Grand pap studied his house, as if he didn’t know whether to go inside or not. As if he were waiting for someone to come out of the house. But of course no one did.
Eyes wide, Lily Belle looked at that house like it was a Christmas tree all lit up. “It sure is a pretty house.”
“Is that all you can say about anything?” I snapped. “Do you think everything is pretty?”
Lily Belle’s voice grew soft. “I don’t see no harm in saying something is pretty. It is. Look at those pretty curtains hanging in that little window. And those are pretty azaleas growing right by the house. Who lives here?”
“No one anymore,” I said, not wanting to explain anything to her.
“Well, someone used to really love that house,” she said. “One day I’m going to have me a pretty house like that. And when I do, I’ll grow pink azaleas out front too.”
Finally Grandpap got back in the Cadillac and we drove back to Pickens Road, listening to Jim Reeves sing “Welcome to My World.”

More images from our beautiful yard on Tanbark Way in April 1977 are featured below:

And now, for no other reason than I like the image of Electra mourning her father in a cemetery called Azalea Path, here is Sylvia Plath’s…

The day you died I went into the dirt,
Into the lightless hibernaculum
Where bees, striped black and gold, sleep
out the blizzard
Like hieratic stones, and the ground is
hard.
It was good for twenty years, that
wintering —
As if you never existed, as if I came
God-fathered into the world from my
mother’s belly:
Her wide bed wore the stain of divinity.
I had nothing to do with guilt or anything
When I wormed back under my mother’s
heart.

Small as a doll in my dress of innocence
I lay dreaming your epic, image by image.
Nobody died or withered on that stage.
Everything took place in a durable
whiteness.
The day I woke, I woke on Churchyard
Hill.
I found your name, I found your bones and
all
Enlisted in a cramped necropolis,
Your speckled stone askew by an iron
fence.

In this charity ward, this poorhouse, where
the dead
Crowd foot to foot, head to head, no flower
Breaks the soil. This is Azalea Path.
A field of burdock opens to the south.
Six feet of yellow gravel cover you.
The artificial red sage does not stir
In the basket of plastic evergreens they put
At the headstone next to yours, nor does it
rot,
Although the rains dissolve a bloody dye:
The ersatz petals drip, and they drip red.

Another kind of redness bothers me:
The day your slack sail drank my sister’s
breath
The flat sea purpled like that evil cloth
My mother unrolled at your last
homecoming.
I borrow the stilts of an old tragedy.
The truth is, one late October, at my birthcry
A scorpion stung its head, an ill-starred
thing;
My mother dreamed you face down in the
sea.

The stony actors poise and pause for
breath.
I brought my love to bear, and then you
died.
It was the gangrene ate you to the bone
My mother said; you died like any man.
How shall I age into that state of mind?
I am the ghost of an infamous suicide,
My own blue razor rusting in my throat.
O pardon the one who knocks for pardon at
Your gate, father — your hound-bitch,
daughter, friend.
It was my love that did us both to death.