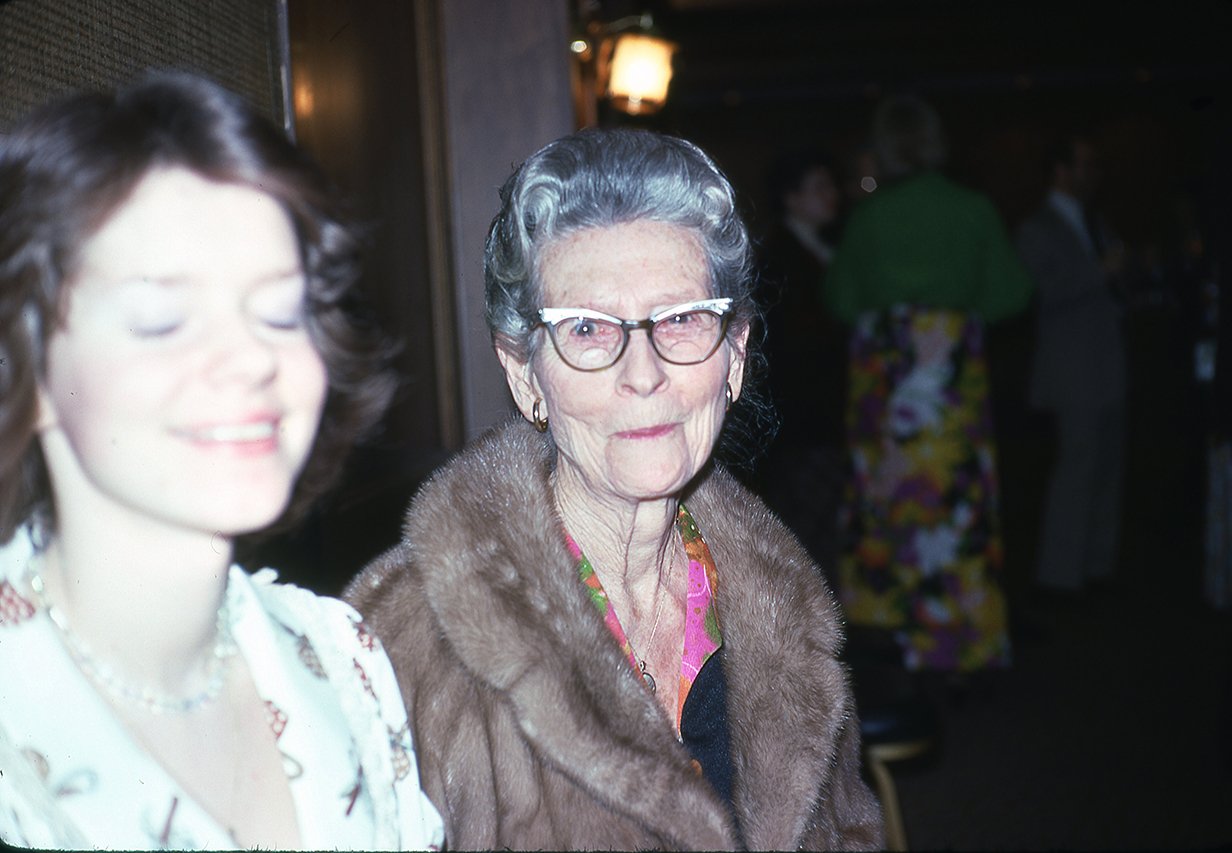 Above: My grandmother Alma in her mink coat, Raleigh, North Carolina, January 7, 1977

As I had just been served my first Rum ‘n’ Coke, the mink wasn’t the only thing fuzzy in this picture.

Click to see what Dad did before he retired

When I look at Dad’s pictures, themes that organize the individual threads of narratives inevitably come to mind. Sometimes I google the word that describes the theme. For Bill’s retirement party, the image that struck me as thematic was my grandmother Alma in her mink coat. Everyone was over-the-top happy that night, like a gala worthy of wearing your furs.

I googled ‘fur coat’ and found this fantastic poem. The first line is the essence of who or what I was in these these pictures. I wish someone had told me then that I wasn’t meant to be waiting around, that my life had already begun.

To my younger self, how wrong you were then
to mistake your hours for waiting,
suspicious the days were only hand motions, shopping bags,
crisp packets of stars and Merino wool, imported from Italy
but resting by your doorway by the tall boots, waiting
for pronouncements of rain, morning static and phone alerts,
the nights a dyed blue cloth, cut with rosemary spritzers
in turns at a card game,
and wrong to think
your dalliances of the heart
were thesaurus entries
under ceiling lamps, one another’s
blind spots emphasized by highlighter.

Nothing in this world is nothing.

Where you pick up the phone, where you play Etta James, where you stand for photographs —
is a fur coat. The dead know what nothing is, that grief
will enter unannounced and make its soundlessness known.
For now, your days are mulberry branches,
housing their sticky gray families of fruit,
their caterpillars and the passage of time,
silvery sap in stalagmites, fleshy and panicked.
Where you can hear it, the noise means everything,
every front page of The New York Times,
the usage of serif fonts
to indicate detail, attention to
subtle aberrances in happiness. Quick,
before you are unfortunate or struck
by the shape of lightning and black ties a skylight
or tunnel so dim and voiceless it haunts the dying, hail a cab,
let it all in, everyone in the cheap apartment,
anybody who will pick up, call, take as many pictures
as you can of family, whatever family
you would gather while it’s still August, you’re still
piled on the stoop with the pigeons and Carlos Rivera
is crooning to you and out of every barbershop.
Wandering a world
so full you feel lost

More Style in the Archive